CS101 Handheld Reader is being used by Hawaiian Legacy Hardwoods (HLH) to track their care and event harvesting.

On a Hawaiian mountainside, RFID tags are being planted alongside saplings of an indigenous tree, to track their care and eventual harvesting. The RFID system, being used by Hawaiian Legacy Hardwoods (HLH), also enables the grower to track each sapling’s lineage, by storing data not just about that tree (linked to a tag’s unique ID number), but also the mother tree (the source of the tree’s specific seed). In that way, the company can better manage forest diversity, and thus ensure a healthier crop of trees.

The company was launched in 2004 with the purchase of a 2,700-acre piece of property on Mauna Kea, an inactive volcano in Hawaii. The property had been cleared for cattle grazing decades prior, and HLH’s plan was to raise koa trees—a rare species native to that state—for investors who purchase rights to trees on lots on the plantation. The koa’s fine-grained red wood is sought after for the manufacture of cabinets, furniture and other high-value products.

At HLH’s nursery, an RFID tag is used to track each koa sapling. 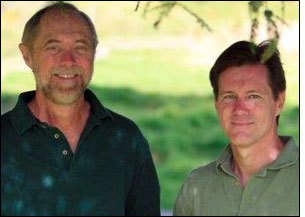 There were several reasons why Hawaiian Legacy Hardwoods chose to attach RFID tags to each tree, says Darrell Fox, the company’s chief operating officer. HLH needed a way to track every tree’s location, lineage and care, as well as share that information with the tree’s owner. Plastic tags printed with bar-coded or text ID numbers would be insufficient, he explains, because they would be unlikely to survive the 25 years that a tree continues to grow before being harvested. In addition, ID tags are inserted into the ground, where they remain while the tree is still a sapling. During those years, leaves and debris can cover that tag, making it difficult to find and read a tag lacking an RFID chip. Consequently, Fox believed the use of RFID would make record keeping related to the trees more accurate and efficient

Therefore, the company began seeking an RFID solution, and ultimately selected Confidex’s Pino passive ultrahigh-frequency (UHF) tag, designed specifically for tracking trees and wooden objects. When a seed is first planted in a biodegradable pot at the company’s nursery, it is accompanied by an RFID tag encoded with a unique ID number linked to the date and information about its mother tree. In that way, when the trees are planted, the staff has a record of each sapling’s lineage and can thus ensure they do not exclusively plant trees from a single mother tree in one area, which would reduce the forest’s diversity and, therefore, the general health of the trees within it. The tags, which comply with the EPC Gen 2 standard, are read using a Convergence Systems CS101 handheld interrogator, and the data is then transmitted from the handheld reader to the company’s back-end system via a Wi-Fi connection. That data is saved on HLH’s Web-based database, using software the firm developed itself.

For each procedure that follows, such as adding fertilizer, the tag is again read and the procedure is recorded in the software. Approximately 12 weeks later, when the tree is around six inches in height, it is relocated to its assigned lot on Mauna Kea. The tag, which is three inches long and encased in white, weather-resistant PET plastic, is inserted into the ground—but protruding enough out of the soil to be easily read from a distance of about 10 feet.

Each square, quarter-acre lot is defined by its latitude and longitude. To accomplish this, Fox employs a GPS device, reading locations at a lot’s four corners, and driving a long PVC pin into the ground at each corner point in order to physically mark it. He then uploads the longitude and latitude data for each corner into GIS software on the back-end system. With a GPS module CS501 (which the company has on order) on the Convergence Systems handheld RFID reader, HLH will also have each tree’s GPS location as the tags are read. “I will still probably read the corner locations with the stand-alone device to help error-proof the documentation,” he says, “and more easily generate field maps for use by our team.”

While monitoring and maintaining the trees in the lots, employees use the handheld interrogator to read each tag’s ID number, which is linked to the investor in the back-end software, ensuring the lot’s location for each investor is stored along with the ID numbers of all trees planted within its perimeter. As the trees are thinned, their RFID tags are read and “retired,” meaning the software is updated to indicate those particular trees have been removed.

The planting of saplings began in February of this year, and the company now has 200 lots under cultivation, for a total of 20,000 trees, all of which have RFID tags. Within the next few years, the company hopes to have about 250,000 planted.

The trees grow fast, the company reports. When approximately three and a half years old, they can stand as much as 35 feet tall, and by the eighth year (by which time some of the trees have been thinned out and harvested), the largest will have reached about eight inches in diameter and 45 feet in height. At that point, each RFID tag will be removed from the soil and glued directly to the tree trunk’s bark, at chest-height. The trunk will subsequently grow around the tag, securing it in place. When soil is fertilized, a tree is pruned, or any other event occurs related to tree maintenance, the tag will be read again, and data will be input regarding that event. Information will then be stored on a SIM card on the Convergence Systems device, to later be uploaded onto the back-end server at the end of the day. The handheld device can also transmit data via a GSM cellular transmission; however, there is currently no cellular coverage in that mountainous region.

Investors can also use the handhelds if they go to the mountain to visually inspect the lots and the trees they contain. In that case, the investors could take a handheld with them, and read the trees’ tags to help locate and confirm their lots.

At around the age of 25, the trees should be up to 50 feet tall, 20 to 25 inches wide, and ready for harvesting. The tag can go with the tree’s trunk to the lumber facility, where it could then be read to confirm the tree’s origins, maintenance history, and lineage before it is cut up into logs and boards, says HLH’s CEO, Jeffrey Dunster. Harvesting facilities, however, may not have RFID readers at the time the trees begin to be harvested, some time in the next 20 years or more.

Although the software is currently accessible only by HLH’s staff, Fox says his company intends to make the data accessible in the near future to investors through its Web site, with a user name and password. The investors could then check the trees’ status on their lot at any time.