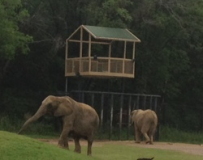 The Dallas Zoo has received praise from zookeepers around the world for their award-winning Giants of the Savanna exhibit. This unique habitat allows elephants, giraffes, and other species to roam together freely. What’s also unique about the exhibit is the fact that the zoo is using RFID technology to track the movement of the elephants. This is the inaugural installation of Animal Performance Systems (“APS”) TangaTracker system. The solution uses the CSL RTLS (real-time-location-system) that our team reviewed (How to Install a Real Time Location System, or RTLS). Although RFID technology is used for tracking farm animals like cattle, elephant tracking is, well, a much bigger challenge. The zoo wants to track the exact location of the elephants all the time and the terrain has a number of obstacles including a large watering hole and varying elevations.

This system uses small RTLS tags as ankle bracelets to track their movement. The RTLS anchors, or readers, are placed in the research towers and positioned to track the elephants as they move around. The elephant’s position is recorded every 30 seconds and the data is overlaid on a map of the habitat. This information graphically shows researchers the places the elephants like to go, the other animals in the herd they spend the most time with, and how much exercise they’re getting.

“We plan to capitalize on the capabilities of TangaTracker to enhance our animal conservation, research and education programs plus provide a richer visitor experience.” – Lynn Kramer, D.V.M., Deputy Director, Animal Conservation and Science, Dallas Zoo

APS researched numerous RTLS systems and selected Convergence Systems Limited (CSL) of Hong Kong to provide the necessary hardware and software. CSL’s selection was based on various strong customer recommendations and an acknowledgement of their equipment’s high quality. The CSL team has also proven to be highly responsive throughout the implementation process.

The RFID Network spoke in person and by telephone to several of the engineers that worked on the project. One engineer that installed a competitive RTLS during the evaluation phase even acknowledged that the CSL RTLS was ‘more accurate, easier to install, and less expensive’. The CSL RTLS is priced at $4,000 for a complete solution, while other RTLS systems charge $1,500 – $3,000 per read point and $5,000 – $20,000 for positioning software.

“We developed TangaTracker in response to an unmet need existing at the Dallas Zoo. They wanted to create the first Center of Excellence for animal tracking systems in zoos and other animal exhibit environments. We appreciate the Zoo’s senior management entrusting us with the opportunity to team with them on this ground breaking project,” says Bernie Hansen, President of Animal Performance Systems.

The habitat and the use of RFID technology make Giants of the Savanna a showcase for the Dallas Zoo, and a wonderful example for other zoos around the world.